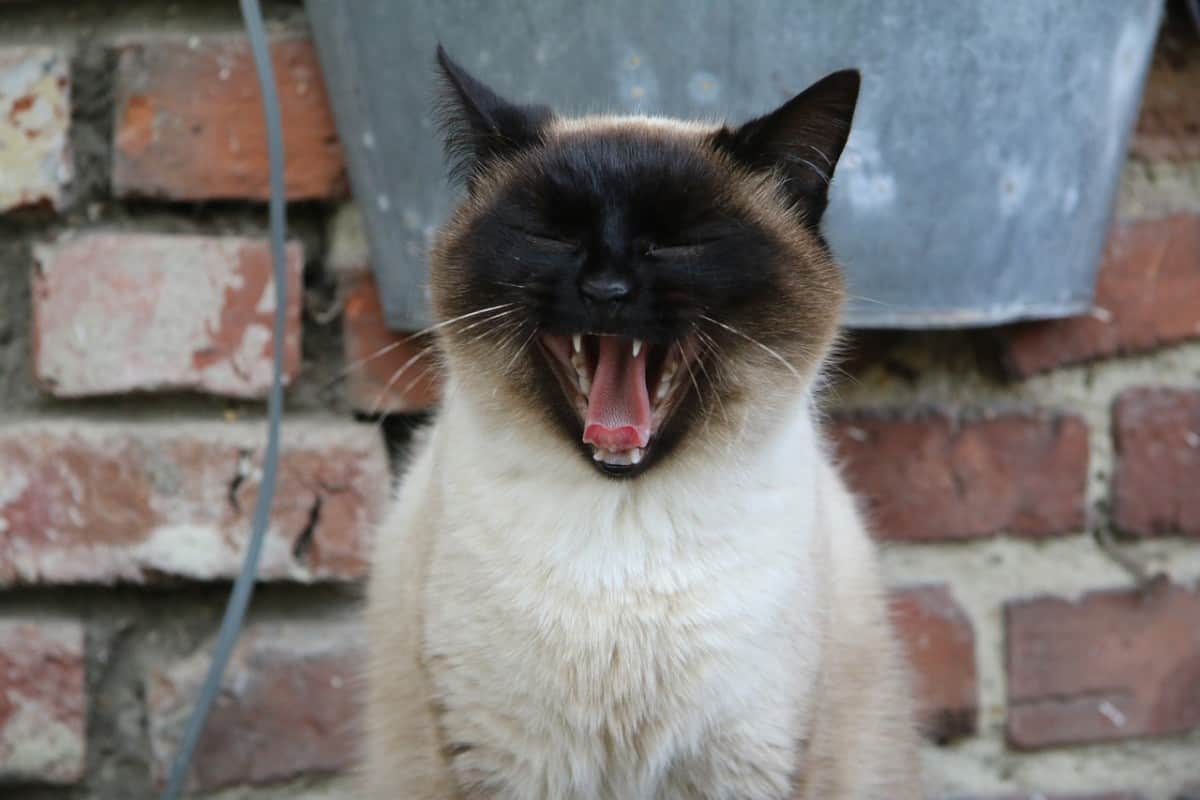 When a cat wants to let us know what’s going on in its life, it can make all sorts of sounds and noises. But what does it mean if a cat has started meowing differently than usual? Why is the cat’s meow suddenly higher pitch? Is it in danger or does it just want a snack? Well, that’s what we’re here to find out.

Caterwauling is one of the most important noises our cat makes. It’s usually a high-pitch sound that resembles yowling, and it is long and melodramatic. When a cat starts caterwauling, it usually means it’s in danger, pain, or that something’s wrong.

As soon as we hear this high-pitch meow, we have to pay attention to our cat. We need to try to decipher what’s going on. Why Is My Cat’s Meow Suddenly Higher Pitch?

Let’s do a quick breakdown and show what makes a cat’s meow suddenly higher pitch.

Most often, a cat will go to great lengths to try and hide its pain, so if it starts caterwauling, something is seriously wrong. If we have an older cat or one that’s recently experienced some kind of trauma and is letting out a high-pitch meow, we should take it to a vet straight away.

The vet will first look for signs of physical injury, like broken bones or bumps, and bruises. But if it’s not that, the cat might have an overactive thyroid or kidney disease. If that’s the case, the vet has to prescribe a treatment method right away.

2. The Cat Wants to Breed

If we haven’t spayed or neutered our cat, it might be letting out a high-pitch scream to tell us that it wants to mate. Usually, the female cats that are kept indoors are the loudest because they’re trying to attract the males.

On the other hand, when an un-neutered male senses that there’s a female cat close to him who wants to mate, it’ll also start caterwauling.

However, one thing to keep in mind is that the sex act between two cats usually isn’t pleasant for the female. In fact, it’ll most likely release a high-pitch scream during and after mating.

Luckily, there’s a way to take care of the problem — spaying and neutering the cat. Not only would it get rid of yowling, but it would also help with the cat overpopulation problem.

3. The Cat Wants Our Attention

It should come as no surprise, but nine out of ten times, when a cat starts meowing in whatever way, it’s trying to get our attention. It might start caterwauling if it wants us to give it food, water, or attention. While it’s important to be attentive to our cat’s needs, we also can’t let it manipulate us.

If we’ve ruled out a medical problem or mating as a reason for the meowing, we have to be careful not to give in to our cat’s every whim. It’s probably using a high-pitch meow to get us to do its bidding.

So if our cat starts yowling at 3 AM because it wants treats, we should tell it to move over. If we give in and provide treats, it will be almost impossible to train that behavior out of your cat later. 4. The Cat Is Trying to Alert Us to Outside Activity

Sometimes, we might hear the cat yowling while it’s standing in front of a window and seemingly staring into the distance. However, when a cat releases a high-pitch scream, it could be telling us that it’s seen something that’s upsetting it.

If it’s nothing serious, but rather the cat’s seen a pigeon or another cat, we should remove the source of agitation. We can close the windows or blinds and restrict the cat’s view of whatever is upsetting it. But if it still won’t give up and move, we can pick it up and move it to a different room for a quick time-out.

5. The Cat Is Feeling Insecure or Vulnerable

It’s common for cats to start yowling when they feel stressed, insecure, or vulnerable. Now, some cats are more clingy than others and they might start meowing as soon as their owner leaves the house or even the room.

That’s because the cat feels abandoned and alone, which makes it feel anxious. Also, a cat can start meowing loudly if and when we change our place of residence. When they’re in a new place, they’re unsure of their surroundings and can become scared.

If we feel our cat is experiencing any of these emotions, we should shower it with extra love and affection. We can bring the cat to bed with us and give it some cuddles to show that everything’s alright. 6. The Cat Is Disoriented

As cats age, it’s pretty normal for them to become disoriented or a bit confused and start yowling. That’s because they might be showing signs of feline cognitive dysfunction (FCD) or cat dementia.

Some statistics show that around 55% of cats that are between the ages of 11 and 15 have FCD. But that number jumps to 80% if the cat is older than 16. If a cat has dementia, it will often become confused, disoriented, and anxious.

For those sharing a life with a senior cat, it’s important to rule out FCD to get to the bottom of the high-pitch scream. Luckily, the ASPCA has created a checklist we can go through if we suspect our cat has dementia.

Cats, although sometimes aloof, are pretty sensitive little creatures that can get anxious and upset about the smallest things. When they do, they’ll let us know by belting out a strong and loud meow.

But why is a cat’s meow suddenly higher pitch and can we do something to help? Well, if a cat’s pitch changes for no apparent reason, we can try taking it to a vet and showering it with love. However, it’s important to tell the difference between a cat being upset or in pain and it simply trying to manipulate us.